They’re all over the damn place. Protractors–those same cheap plastic devices we had to pony up for to complete ninth grade geometry–are glued to guard rails, bridge supports, waste bins, mailboxes, lamp posts, and the backs of street signs all over the city.

If you haven’t seen them, you either don’t live around here or you haven’t been looking. There are–or were—hundreds of them[1]. In the hands of our pranksters/artists/mysterions (take your pick) each of the protractors has been painted a solid color, sequentially numbered by hand in big block numerals, and grafted to every manner of publicly-accessible metal surface.

Until now, The Orbit has resisted writing about the so-called “Pittsburgh protractors”. They’ve been around for a number of years and have achieved a certain level of obscure fame. The phenomenon is well documented in one dogged blogger’s map and database[2]. Even the local TV news got involved. The protractors don’t need us…or do they?

We started to realize that a lot of the old familiar golden, purple, green, and pink arches we’re used to seeing around town are disappearing. Gone are standout creatures of the Fort Duquesne, Smithfield Street, and Hot Metal bridges. Lamppost bases are scraped clean; big relay mailboxes and waste bin containers have simply been painted-over in not-quite-matching colors, sparing the maintenance workers the trouble of decoupling the protractors underneath. When oddity turns into nostalgic despair, that’s when The Orbit steps in.

What do the protractors mean?

The Orbit has always been content with a state of bemused wonder, so trying to suss meaning out of someone’s goofy art prank doesn’t concern us that much. As the protractor perpetrator(s) have remained mum this long, it’s unlikely we’ll get any definitive answer any time soon–if ever.

That said, it’s been commonly theorized that the shape of a protractor echoes the gentle arc and twin supports of a standard truss bridge–think the Fort Pitt, Fort Duquesne, or 16th Street bridges. It’s an appealing and believable theory. Pittsburgh is, after all, the “city of bridges,” and the protractors have been applied liberally to many of them.

Who put these up?

It sure seems like no one knows–or, at least, no one’s talking/blogging. According on one old axe, “Three people can keep a secret, if two of them are dead.” By this logic, we’re dealing with one lone wolf–but who knows? What does seem obvious is that the person or persons behind this are intimately familiar with the walkable/ridable core of central Pittsburgh.

The aforementioned map contains points almost solely within the East End, Central North Side, and a very small representation of South Side (really just the river trail). We see nothing up in or over the hills, in the suburbs, or, frankly, in the black neighborhoods. There are also no reports from downtown, Squirrel Hill, or Greenfield–but some of this may be the bias of who’s reporting the finds, rather than actual placement.

All this certainly points to a bicycle-rider. There are a ton of protractors along the river trails and probably more along the bridge pedestrian walkways (although many of these have been removed). But beyond that….we got nuthin’.

Frankly, we’ve always had some issues with the protractors. It’s such an interesting and dedicated act of…mystery, but the slapped-on, haphazard approach and application often feels like it falls just short. Why not even them up, add an element, make them sing?

But as we muddled over this story, we realized what a minor gripe this really is. This blogger has great respect for any covert operation that exists for this long without anyone spilling the beans. We also love that the targets are all the city’s forgotten infrastructure–no private property has been harmed in the addition of the protractors[4].

And then, of course, there’s the egg hunt. If this whole thing has gotten even just a small number of dedicated weirdos to take to the streets, bridges, and bicycle trails with an eye out for the curve, well, The Orbit says hats off for the protractor perpetrators getting people off their keisters, into the outdoors, and observing their surroundings. 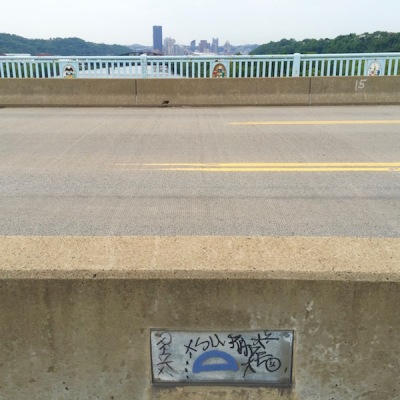 [1]  At least 500. But, you know, it ain’t official.
[2]  Just in comparing notes for this story, it was obvious how difficult keeping the map accurate and current would be. Many of the inclusions on the map are no longer there, and likewise many of the (newer?) protractors we located aren’t listed.
[3]  Identification from Eric Lidji’s Pittsburgh Protractor Map, which also includes a photo before the paint-over.
[4]  We wish the War on Google and Facebook is Boring taggers would be this respectful.

7 thoughts on “A Paean to the Disappearing Pittsburgh Protractors”