Editor’s note: This story on the various available guides to Lenten fish fries first ran in 2016, but is obviously a valuable resource every year. We’ve done our best to update links for 2018, but definitely let us know if there’s something new we’re missing, a better site, etc.

For some, it is leafing through seed catalogs. It may be freezing outside, but the simple act of dog-earing full-color pages of enticing heirloom vegetables and glorious full-bloom flowers invokes a not-too-distant future digging in the dirt, pulling weeds, and planting tight rows of zebra-striped tomatoes and black Hungarian peppers. They’ll even take the opportunity to cast lettuce seed directly in the snow–a holdover until the St. Patrick’s Day peas are sewn in the inevitable bone-chilling soil. Anything for a breath of life.

For others, it is the sound of horsehide slapping cowhide as pudgy catchers receive wayward fastballs and woe-be-gone change-ups from out-of-practice Skoal-spitting pitchers. [At least we sure hope they’re still allowed to chew tobacco before the real season begins.] Images of sun-soaked Kissimmee, Bradenton, and Jupiter transport those in bleached, bare-treed northern climes. You can almost smell the luxurious perfect green blanket.

But if you insist on knowing my bliss, I’ll tell you this. Here at The Orbit, our first gentle gust of spring blows in with the arrival of Lent and its barrage of church fund-raising Lenten dinners. These fried fish feasts are so numerous they require a comprehensive guide. As it turns out, you even need a guide just to make sense of all of the fish guides out there. That is why we’re here. 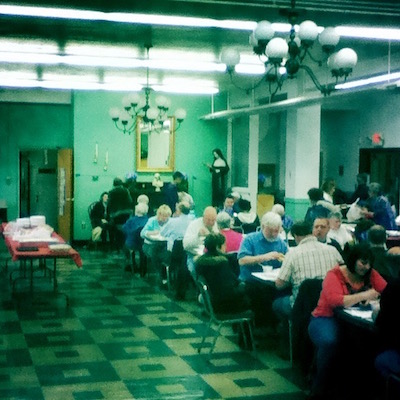 Available in both HTML and handy, print-friendly text formats, Pittsburgh Catholic‘s list is definitely the big fish in this particular roiling grease-filled pond. The guide has the no-nonsense pre-Internet feel of kind parishioners dutifully volunteering their time to type out, update, and double-check their facts each February, all in the name of the Lord. It was likely the region’s first fish fry guide (?) and for this blogger, it’s still the best.

It was the Pittsburgh Catholic list that led us to the late, great St. John Vianney in Allentown (the church was just closed by the diocese early in 2016). St. John was not only open for Friday lunches (a rarity) but offered a spectacular dessert table where the kinds of confections you thought had been banished from this earth (Jello surprise! Pretzel salad! Pineapple upside-down cake! Dirt!) were generously spooned out by the congregants for sums in the twenty-five to fifty cent range. Maybe if they’d asked a more reasonable price, St. John would still be running Sunday services and The Orbit could be dining there this Friday. Sigh.

Each of the local “Big 3” TV news affiliates has their own guide. KDKA‘s is your basic nuts-and-bolts alphabetized (by church name) list, including the bare essential name, address, hours, and menu items. It’s the best of the lot. WPXI has improved considerably in the last couple years, now offering the same basic script that we see on other sources. It’s nothing fancy, but it’ll get you dinner on Friday night.

WTAE basically phones it in with a “guide” that simply lists names and addresses of locations that claim to have fish fries. There are no other details–no menus, no days or times of service, no bonus data. For that reason–and the bounty of other options–you can safely skip this one too.

The Post-Gazette’s interactive “Find a Fish Fry!” site, new in 2018

This year, the Post-Gazette has upped its ante considerably. In past, there were no detailed listings, instead focusing on a few random highlights. It was interesting if you already had a plan, but no resource for the hardcore fisherman or fisherwoman.

The new guide is a really nicely designed app that includes a lot of nice bonus info. However, with just the most casual perusal, it’s obvious the P-G still has a lot more data entry to do. [How can you possibly miss Sacred Heart on your first pass?] We’d also like to see some filtering options. It’s fine to include The Harris Grill (I guess), but please let the user skip the noise and get down to the church fries.

As far as other print-first resources, the Tribune-Review has some scattered stories with suburb-specific listings, but they’re not nearly comprehensive enough for us to bother wasting your time. Every year, it seems, the City Paper opts to sit this one out.

By contrast, Code for Pittsburgh’s 2018 Lenten Fish Fry Map is what the Post-Gazette‘s new tool is trying to be. The interactive web site is extremely useful if your first concern is where the fish is. Zeroing in on a particular location and selecting its pinned point gives the same basic information you get from Pittsburgh Catholic and KDKA (name, address, brief menu description). A good resource for the time- and distance-restricted and definitely preferable to the TV station listings.

Fish fry guides have gone totally Lent 2.0 with their own social media presence on the Pittsburgh Lenten Fish Fry Map FaceBook page and @pghfishfry Twitter account. As one may expect, these are less comprehensive guides and more in-realtime breaking fish-related news. The latter seems to be a little more active than the former, but we’re only one week in so far, so we’ll keep tuned to see how this thing plays out.

Launched last year with some amount of fanfare, The Incline’s “Ultimate Pittsburgh Fish Fry” bracket looks a lot like the office’s NCAA tournament pool, but tastes a lot better. This was obviously enough of a success in 2017 for it to come back again a year later, this time with ABC affiliate WTAE as a media partner. The Orbit is just not that competitive–nor can we realistically get to 32 fish fries this Lent—but we love the spirit behind this one.

Lastly, we wouldn’t be reporting if we didn’t mention that there’s even a mobile phone app called PGH FF & FF. But it gets such pathetic reviews, we’ll not dignify it with a hyperlink.

3 thoughts on “Fish On My List: An Orbit Guide to Fish Fry Guides”