No, when Chris Fischer jets to London, it’s on the shoe leather express.  And it’s probably just over to Long John Silver’s.  That certified gold Nathaniel Hoier cassette?  Dubbed by hand, artisanally, they way they did it in olden times (er…the 1990s).  Your order will arrive with a personal letter, in block letters, with fancy spellings.

Last year Fischer’s record/cassette/art/zine enterprise Unread Records & Tapes celebrated twenty years of pressing the Record and Play buttons with a two-day all-hands-on-deck (ahem, most hands) label festival and art show in Omaha, Nebraska. For the lion’s share of the label’s twenty years, Fischer lived in Omaha, which is why the fete was back there. Some majority of the Unread’s enormous (170+ releases, and counting) output comes from that part of the world, including household names like The Debts, Lonnie Eugene Methe, The Dad, David Kenneth Nance, Places We Slept, and Noah Sterba. 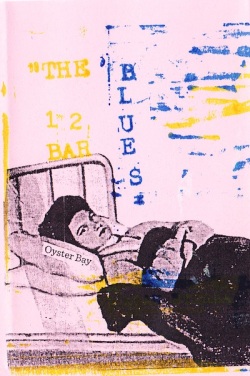 So why is this profile appearing in the Pittsburgh Orbit and not in, you know, the Omaha Orbit? Well, I’m glad you asked! Fischer, a Pennsylvania native (though, from the other side of the state), relocated to our fair city a couple years ago and is steadily making this place home. Here in Pittsburgh, Unread has invested in our own Swampwalk, C. Frank, and some other cats.

[Full disclosure: This music-loving and -making blogger also sings and strums, blurts and bleeps on the side. Some of those sounds have been captured and capitalized by Unread Records.]

In the kitchen, cooking up beats

We started this piece way back in the late winter, hence Fischer’s very un-Summer attire in these photos. But it never felt right. What they told us in our journalism correspondence course (D is still passing, right?) is that like a winter coat–or a mackerel–every great article needs a hook to hang on, and we just didn’t have one. So we put this post on the shelf and went off looking for weird pizza and Jimmy “The Greek’s” grave. And while Chris hasn’t exactly been sitting on his keister (the label has issued at least a half dozen new cassettes and one l.p. in the last few months) we found our hook–or at least our exclamation point–with Public Coffin. 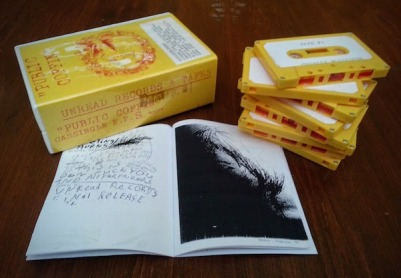 This Coffin is as pure a representation of the Unread aesthetic as anything you’ll find: hopelessly, uncompromisingly in love with that most outdated and maligned of media: the audio cassette, (cassette singles, no less!) and filled with whole-heart no-fi stuffing. The package features eight of the label’s standard-bearers, including collection co-conspirator and plains troubadour Simon Joyner, each turning in e.p.-length mini-albums that range from damaged and noisy to weird “pop” to pure, lonely desolation.

The mustard yellow cassettes arrive in a hand-silk-screened package that includes a 32-page book that serves as liner notes, fanzine, artists’ excrement, and head-scratching objet d’art. Fischer is also a printmaker, artist, and zine creationist whose scratchings and silk-screenery decorate much of the Unread catalog.

Unread’s twenty-first anniversary is coming up this fall. This time, the annual “Junkfest” event will take place in Pittsburgh (date and location still to-be-decided, but we’ll report back). That’s plenty of time to find yourself a boombox, clear off a little counter space, and get your old Fast Forward and Rewind chops all worked-out. You’ll need them.

Chris Fischer: on the ball and havin’ fun

4 thoughts on “Unread: The Record Label Next Door”