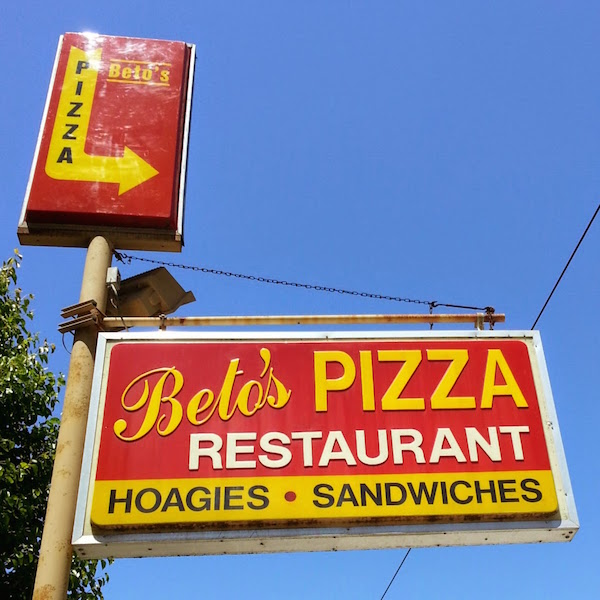 Pizza has gotten almost totally standardized. Sure, there’s a couple varieties: New York-style thin-crust and Chicago-style deep dish, square Sicilian, and some fancy places dress theirs up in various ways, but you’ve pretty much seen it before.

We’ve been collecting stories about Pittsburgh-area pizza houses that do something fundamentally different from any of the above standard configurations. We’re not trying to name the best pizza (although each of these has its super fans); we’re just looking for something that’s truly unique. These will be explored in a new series called The Pizza Chase. And we’re going to start with Beto’s Pizza of Beechview.

There are a bunch of goofy things about Beto’s:

First: there are only two denominations of pie: either individual cuts (approximately 4″ square) or an entire 28-cut rectangular “tray”. Nothing round; none of this small/medium/large business. You’re either all-in, or you take it on the run.

Second: ordering individual cuts (as almost all customers seem to do) takes exactly the same time as ordering a whole tray. (We were told this by the staff and wound up ordering a tray on our first visit; they speak the truth.) How can that be? Anywhere else, the cuts are ready to go and they just pop them in the oven for a minute to warm them up. Not at Beto’s. What are they doing back there? I don’t know, but they’re not working off the standard playbook.

Third: even if you order a full tray, it doesn’t arrive on anything resembling one. The pizza is delivered as seven separate plates, each containing four cuts with an giant halo of post-op mozzarella cascading to the floor. 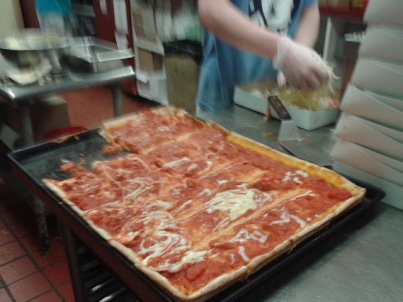 Beto’s full “tray” with four cuts removed. Note the near total lack of melted cheese and the employee applying mozzarella to the box (photo: The Internet)

Most jarringly, Beto’s separates itself from other pizzerias by only adding the cheese and toppings after the pizza has left the oven. This bizarre practice produces a hot-on-the-bottom, cold-on-top sensation that is as pleasurable as being in a hot tub while it’s snowing (to its fans) or as disorienting as, uh, being in a hot tub with a big block of ice on your head (to its detractors). After two visits, The Orbit still isn’t sure where it stands on all this.

I should add that if you are the kind of conformist who wants his or her cheese melted to the rest of the pizza, this is an option you can specify. You just need to order it “baked.” 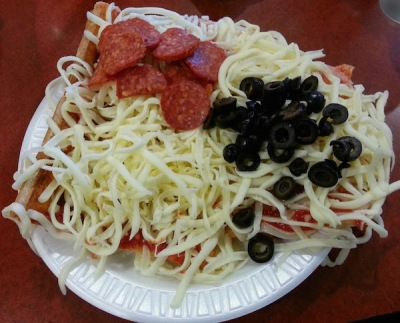 How does it taste? Well, a guy trying to watch his carbs will start by saying that he generally feels like even when pizza is bad, it’s still good. It’s a forbidden fruit, a taboo pleasure to be savored when the occasion presents itself and he’s prepared to put in some extra hill climbs to pay the rent. And so in that sense, Beto’s bi-temperate, sometimes-you-gotta-break-the-rules approach still satisfies.

That said, it is this blogger’s belief that eating melted cheese on fresh-baked pizza dough is one of the world’s great carnal pleasures and to eschew this when you’ve got all the tools and ingredients right there seems insane. But I’m here for the ride. 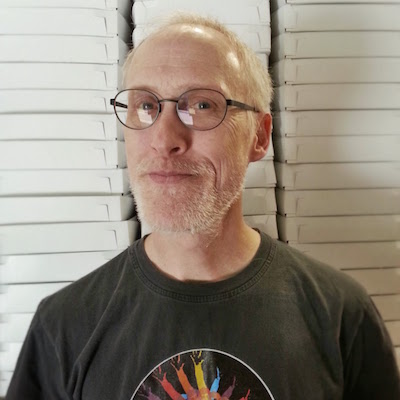 To get a handle on all this, we called in an expert. Carrick native Bob Jungkunz has been a Beto’s customer since at least 1975 when his older sister and her boyfriend first introduced the cross-hills Beto’s to her little brother. Bob has been coming to Beto’s ever since and continues to stop in for dinner nearly once a week.

Bob swears that the pizza preparation hasn’t changed a bit in the last forty years and went on to detail the old environment. Apparently before the expansion of both the dining room and parking lot, it was common for Beto’s customers to simply eat in their cars in the cramped lot, seating in one of the the handful of tiny booths nearly impossible to secure.

Bob describes Beto’s no-cook-topping approach and mild sauce as “subtle” and the overall experience as “very pleasing,” preferring plain cheese, but mixing it up from time-to-time. He also gave us the pro tip that one can order cuts to go and by the time you reach your destination the cold cheese had done its own partial melt from the in-box heat, offering yet another taste and texture option.

Bob is not alone. Beto’s dining room is stuffed with cold-topping cut-consuming customers, photos of smiling faces, decades-old news clippings, and mementos of the pizzeria’s fifty-plus-year history. To-go boxes sit pre-folded from counter height to ceiling everywhere you look around the kitchen, prepped and ready for a phalanx of orders.

Beto’s Pizza is at 1473 Banksville Road in Beechview.

3 thoughts on “The Pizza Chase: Beto’s of Beechview”